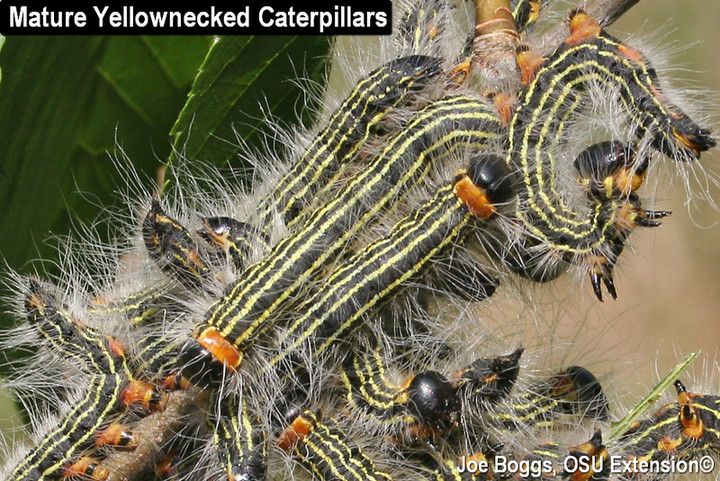 Jim Chatfield sent a picture on Tuesday of a group of middle-instar yellownecked caterpillars (Datana ministra) devouring leaves on a witch-hazel (Hamamelissp.) in Secrest Arboretum. Yellownecks feed in groups, sometimes called “colonies,” numbering 10 – 30 individuals throughout their development. The colonies tend to consume leaves one branch at a time unless populations are high and multiple colonies are feeding on many branches. 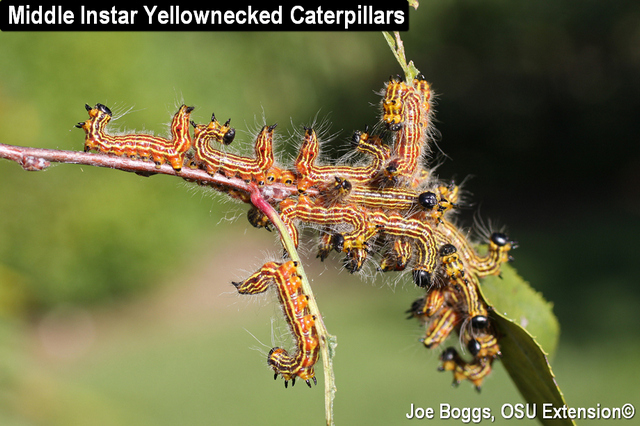 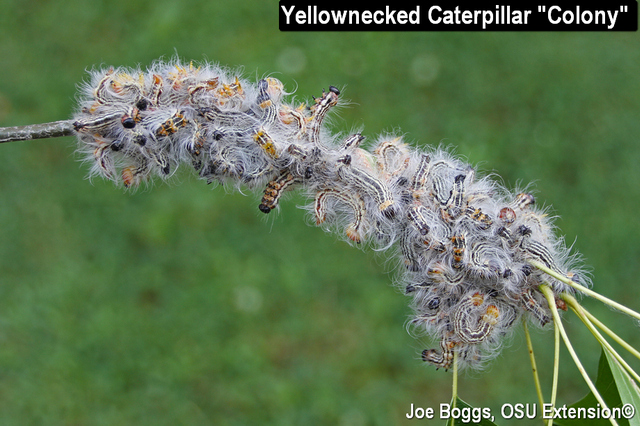 Yellownecked caterpillar moths produce one generation per year in Ohio. However, female moths lay eggs from around mid-June to mid-July meaning early instar caterpillars may be found at the same time as late instars giving the impression there is more than one generation. 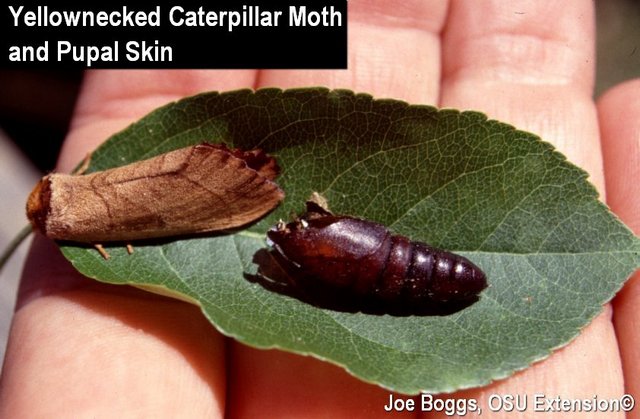 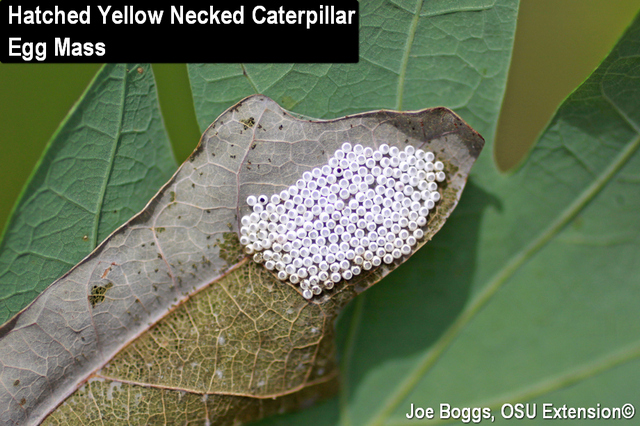 The caterpillars pass through three distinct “color phases” during their development which means colors and markings change as the caterpillars mature. Their “yellownecked” common name comes from a yellowish-orange “neck,” or prothorax, located just behind their black head capsule. This feature becomes more apparent during the later instar stages. 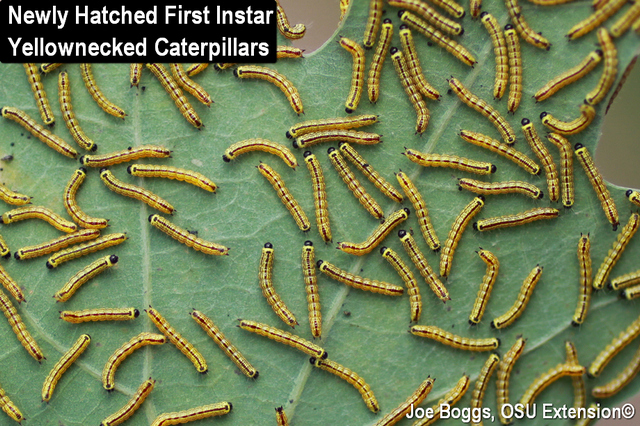 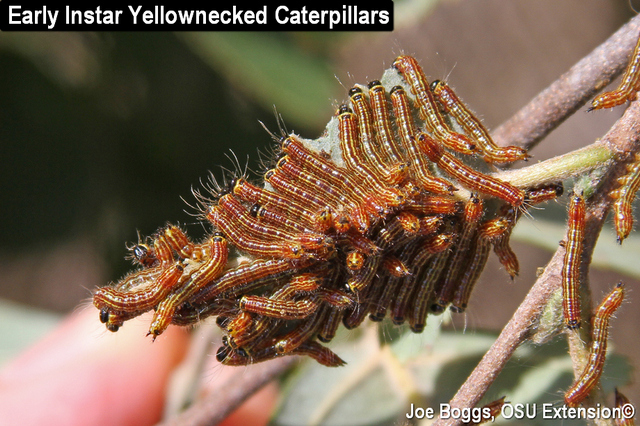 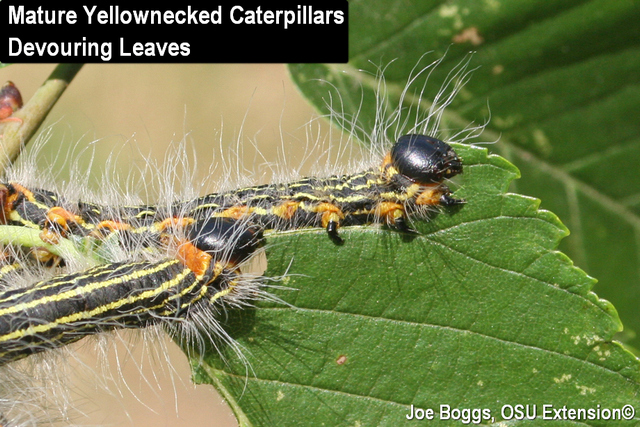 Yellownecks practice an interesting defense behavior when disturbed: the entire colony will rear their front and tail end in unison presumably to confuse predators. You can see this by wriggling a finger near a colony; the caterpillars have great entertainment value! 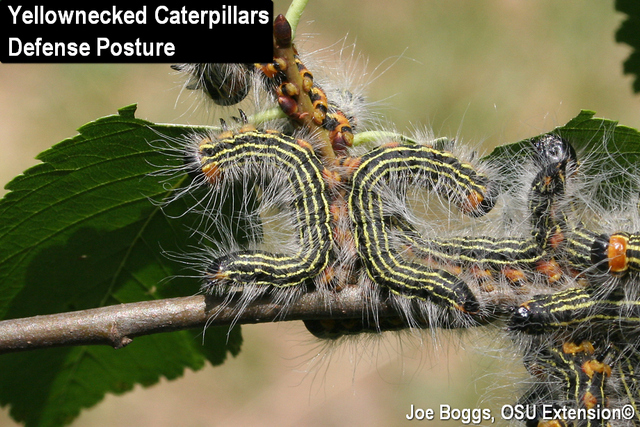 Yellownecked caterpillars are general defoliators and may be found on a wide variety of trees and shrubs including beech; boxwoods; crabapples and other ornamental fruit trees; elms; hickories; honeylocust; maples; and oaks. Newly hatched 1st instar caterpillars feed as skeletonizers on the underside of leaves. Later instar caterpillars devour all of the leaf tissue except for the midveins. 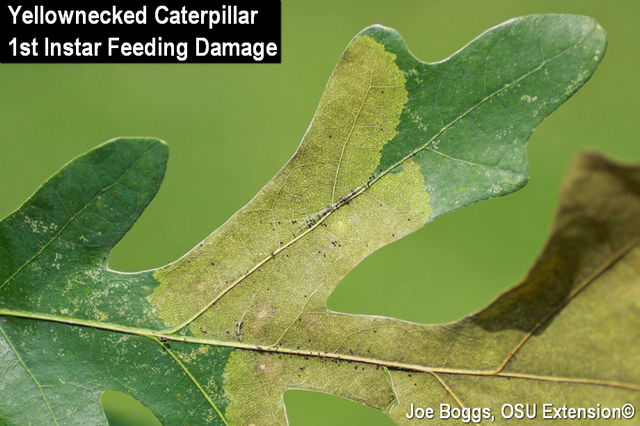 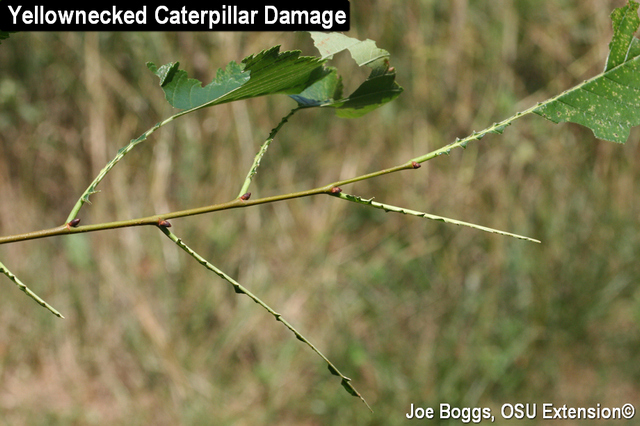 A highly effective management approach for all instar stages is to take advantage of the gregarious nature of the caterpillars. Colonies can be knocked onto the ground and dispatched using the “caterpillar stomp.” This satisfying control method that will preserve beneficial insects. Thus far, no caterpillar populations have become resistant to the caterpillar stomp. 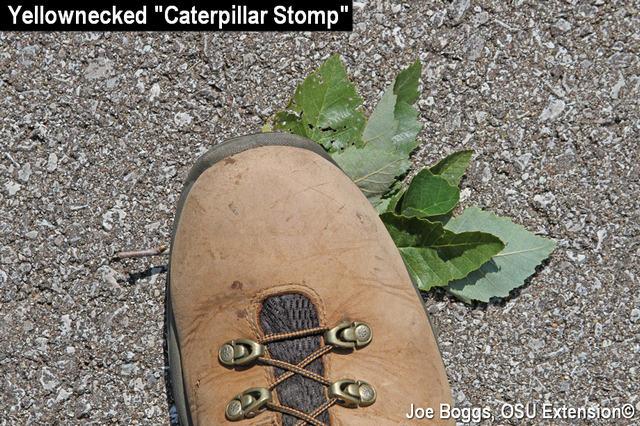 Early instar yellownecked caterpillars can be effectively controlled using the naturally occurring biological insecticideBacillus thuringiensisvar.kurstaki(Btk) (e.g. Dipel, Thuricide, etc.). Fortunately, Btk does not kill bio-allies that help provide natural control of the caterpillar populations. Unfortunately, Btk is most effective on small caterpillars and becomes much less effective when caterpillars reach the middle instar stages, so it’s probably too late for Btk applications throughout much of Ohio.

The older caterpillars can be suppressed using standard appropriately labeled insecticides. However, it’s hard to justify the risk of wiping out beneficial insects given that the caterpillars are nearing pupations, so most of the damage has already been done, and there is only one generation per season.