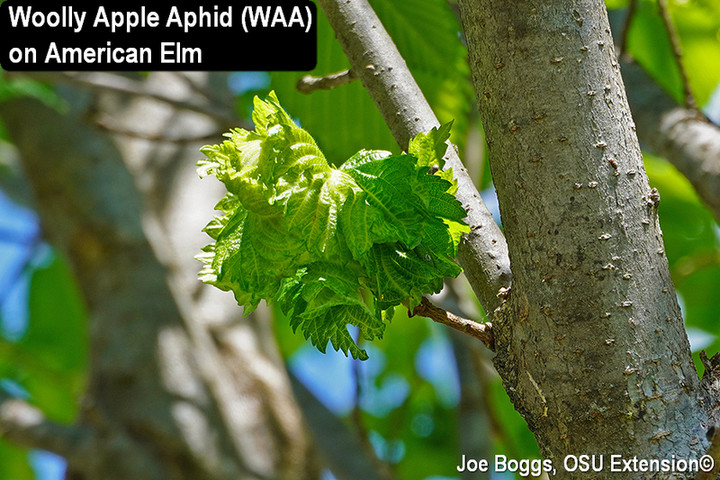 Thanks to the sharp eyes of Dave Bienemann (Municipal Arborist/Utility Forester, City of Hamilton), I was able to take some nice pictures of the woolly apple aphid (Eriosoma lanigerum) and it’s characteristic damage on its alternate host, American elm (Ulmus americana). This isn’t the only woolly aphid that uses our native elm as an alternate host. The woolly elm aphid (E. americanum) is another historical American elm pest.

Both of these woolly aphids are native insects that appear in pest records dating back to when American elms were “America’s Street Tree.” Of course, as American elms reemerge to once again be widely used along our streets and in landscapes, we’re becoming reacquainted with these old woolly pests.

Spring feeding damage by the woolly apple aphid (WAA) causes shoots to form rosette-like structures comprised of curled, twisted, and stunted leaves. The affected leaves overlap producing cavities within which the aphids live and feed. Although the leaf distortions appear to be random, opening the structure may reveal striking spiral-like patterns produced by the leaf veins. 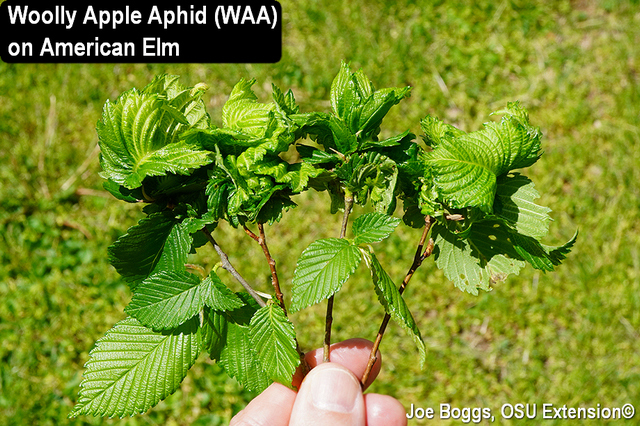 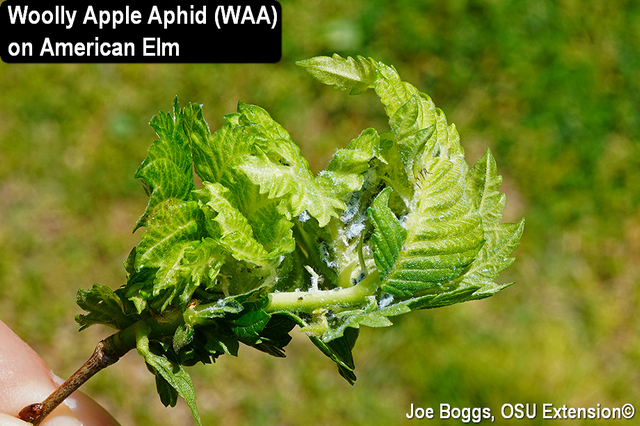 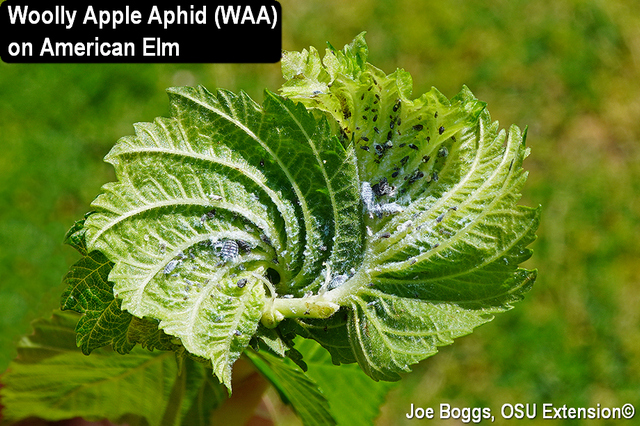 WAA also produces copious quantities of honeydew as a by-product of tapping into phloem vessels to extract sap. The honeydew rains down onto lower leaves and stems as well as anything else positioned beneath an infested tree. The sweet sticky goo is commonly colonized by black sooty molds further degrading the aesthetic value of heavily infested trees and their immediate surroundings. 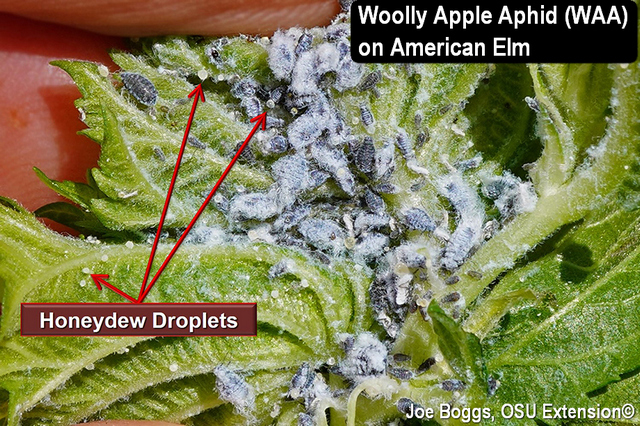 WAA is not considered an outright tree killer. However, some historical reports note that on heavily infested trees, the combination of leaf damage coupled with early-season sap loss may make young trees and/or trees on poor sites more susceptible to other problems. 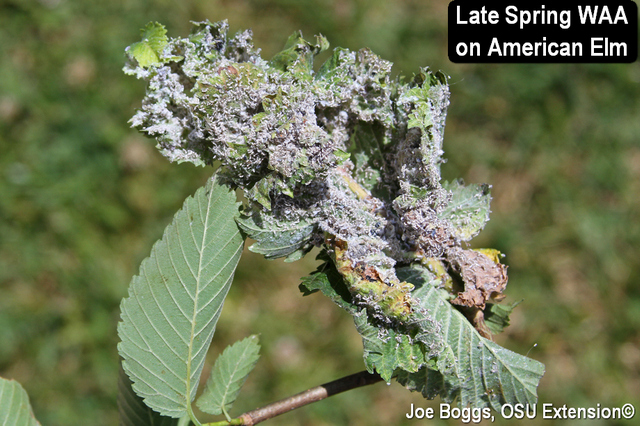 The new crop of aphids that arise from the leaf rosettes migrate to a rosaceous host in the summer where they form damaging colonies on both the shoots and roots. Indeed, as its common name indicates, WAA is a major pest of apples. Interestingly, various online university resources note that with the loss of American elms, this aphid demonstrated the ability to maintain damaging populations on single rosaceous hosts calling into question the need to alternate with an elm host. 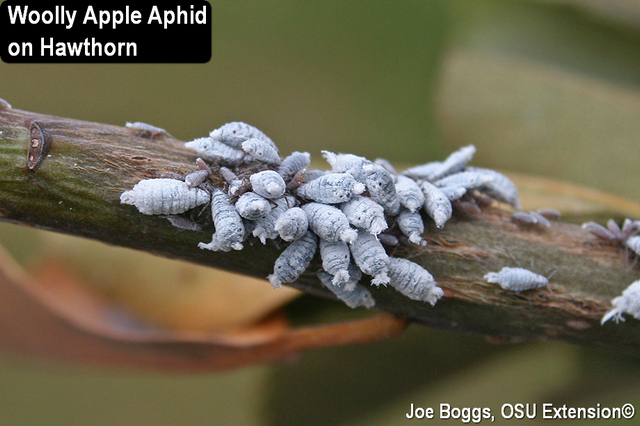 The woolly elm aphid (WEA) causes new leaves to roll along one edge with the tissue becoming swollen to form a gall-like structure which is sometimes referred to as a “pseudo-gall.” The woolly aphids reside and feed within the rolled structure. 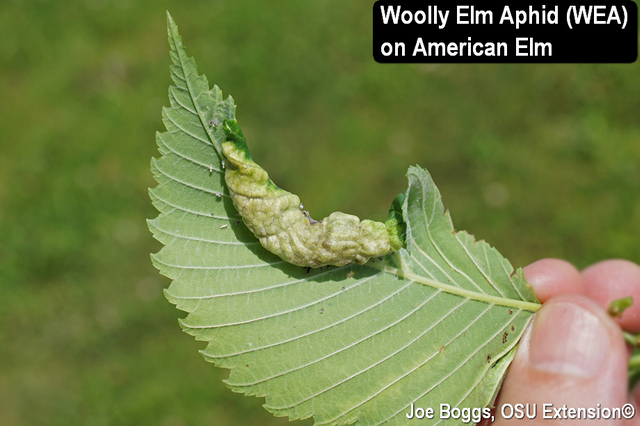 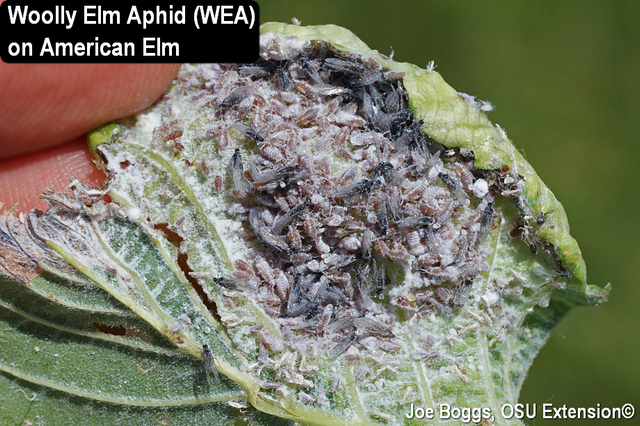 Although the damage may appear unsightly, records indicate that unlike its woolly cousin, WEA seldom causes enough damage to affect the overall health of the host tree. The aphid alternates between the spring leaf-feeding generation on elm and a summer root-feeding generation onAmelanchierspp.

While taking pictures of WAA, I came across the handiwork of the elm cockscomb gall aphid (Colopha ulmicola); another “old friend” that’s worth mentioning. Although I find these galls most often on red elm (U. rubra), I’ve also occasionally found them on American elms. Like WEA, these galls are mostly oddities causing no significant harm to the overall health of their elm host trees. However, their appearance may cause concern. 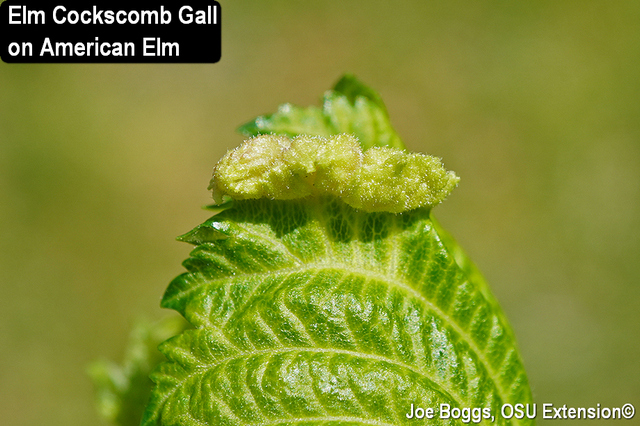 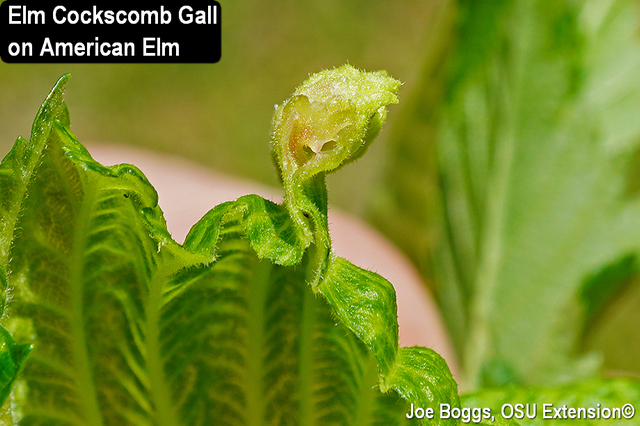 Early cockscomb galls are tubular-shaped, almost worm-like, and light green. As they mature, the galls will take-on the appearance of their descriptive common name: they will look like bright red chicken cockscombs rising up from elm leaves. It’s a strange sight. 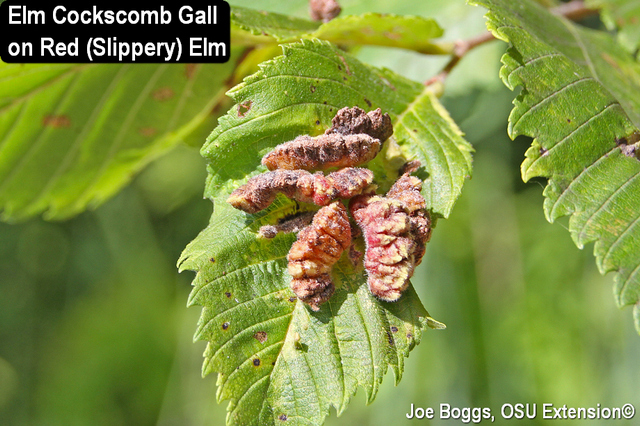 This is another two-host aphid. The cockscomb galls will release winged aphids later this season through a slit on the underside of the leaf. These aphids fly to grass plants where they produce offspring that suck juices from grass roots. Their offspring fly back to elms in the fall to spend the winter in bark crevices. 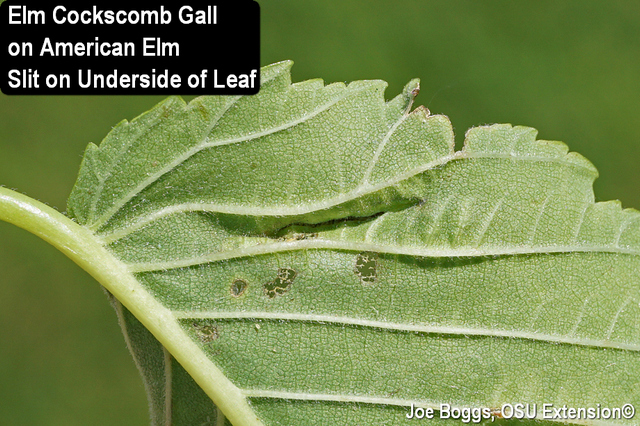 The rise and fall, then rise again of American elm has been remarkable. Along the way, we’ve picked up a smorgasbord of genetic variations aimed at thwarting Dutch elm disease. These include selections of American elm; selections of non-native elms; and a mix and match of hybrids produced from parents drawn from North America, Europe, and Asia. What impact has this had on old elm pests?

Dan Potter and Carl Redmond (University of Kentucky, Department of Entomology) used elms planted in Lexington, KY, that were part of the National Elm Trial to assess host preferences for an impressive range of potential elm pests including the woolly and cockscomb aphids. You can access their full publication titled, “Relative Resistance or Susceptibility of Landscape-suitable Elms (Ulmusspp.) to Multiple Insect Pests,” by clicking this hotlink: https://webdoc.agsci.colostate.edu/bspm/Kentucky2013.pdf

The Kentucky researchers found that WEA is selective forUlmus americana, but all cultivars were not equal. ‘Princeton’ was the most susceptible followed by ‘Valley Forge’, ‘Jefferson’, and ‘New Harmony’. ‘Lewis and Clark Prairie Expedition’ was not infested. None of the Asian elms or hybrids involving Asian or European heritage were affected.

They also observed that WAA was highly selective for American elm and none of the Asian elms or hybrids involving Asian or European heritage were affected. But again, all American elm cultivars were not equal. ‘Princeton’ was the most susceptible followed closely by ‘Jefferson’. ‘Valley Forge’ and ‘New Harmony’ had minor infestations and ‘Lewis and Clark Prairie Expedition’ was not infested.

The elm cockscomb gall aphid likewise demonstrated a strong preference for American elms over non-natives as well as hybrids involving Asian or European elms. However again, all American elm cultivars were not equal. Combining two years of data (2011, 2012) ‘Jefferson’ was most often selected with ‘Princeton’, ‘Valley Forge’, ‘Lewis and Clark Prairie Expedition’ having minor infestations. ‘New Harmony’ was not infested nor were any of the non-native elms or elm hybrids involving non-native parentage.

One thought on “Wooly Aphids – Watch Out, They’re Here!”