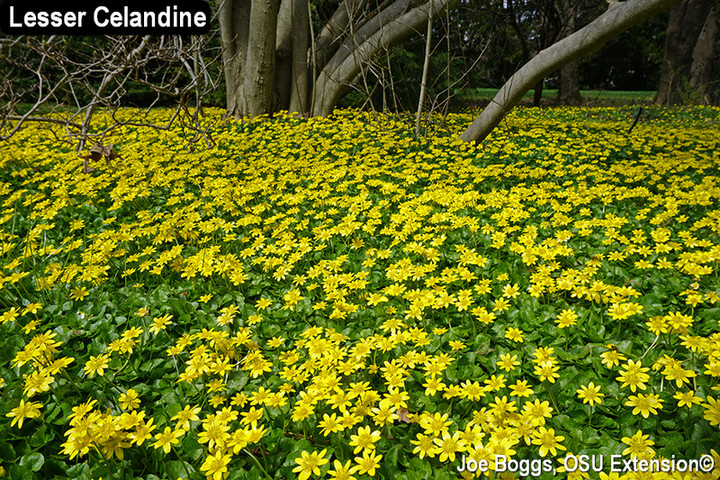 Lesser Celandine (Ficaria verna(previouslyRanunculus ficaria)) is now very evident in southern Ohio. Blooms have not yet appeared; however, this conspicuous life-cycle stage is just around the corner.

This non-native highly-invasive weed belongs to the buttercup family, Ranunculaceae, and is sometimes called “fig buttercup.” The “fig” refers to the shape of the underground tubers and “buttercup” describes the flowers. 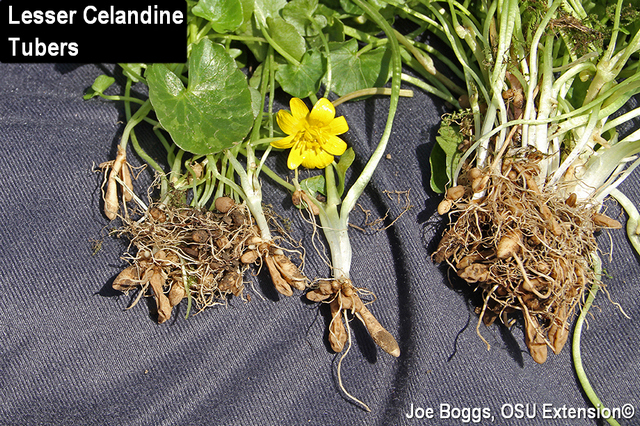 Lesser celandine is known as a “spring ephemeral” owing to the time of year when the short-lived plants and flowers are present. The majority of this weed’s hide-and-seek life-cycle is spent hidden from view as underground tubers.

The taxonomy of this Eurasian native has long been debated with some sources indicating there are subspecies, varieties, and geographical genotypes. Part of the confusion stems from a seasonal variation in flower parts with early-flowering plants having more flower parts compared to late-flowering plants.

I’ve never observed seed production on lesser celandine in southwest Ohio. Of course, this does not mean diploid plants do not occur in my part of the state or elsewhere in Ohio. In fact, seed production may account for some of the rapid spread of lesser celandine observed in various parts of the state. However, I have no doubt that plants in southwest Ohio produce bulbils; I’ve frequently observed and photographed these structures.

Lesser celandine is native to Europe, northern Africa, western Asia, and Siberia. It is believed to have been first introduced to North America as an ornamental in the mid-1800s and escapes were reported in Pennsylvania in 1867. 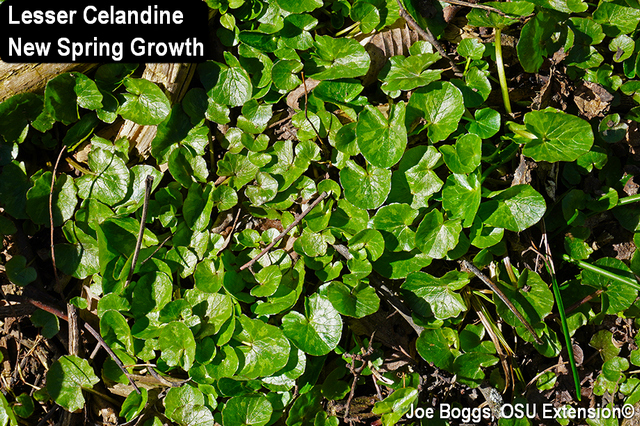 Profuse glossy, butter-yellow flowers that are about 1″ in diameter rise singly on stalks slightly above the foliage. The overall effect of a massive colony of lesser celandine is a magical-looking dark green carpet speckled with flecks of bright yellow. 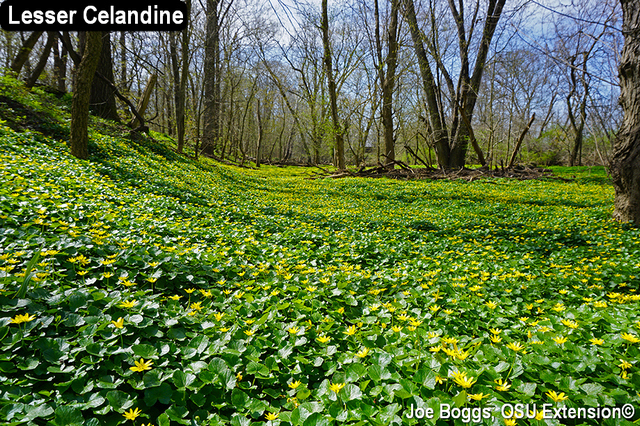 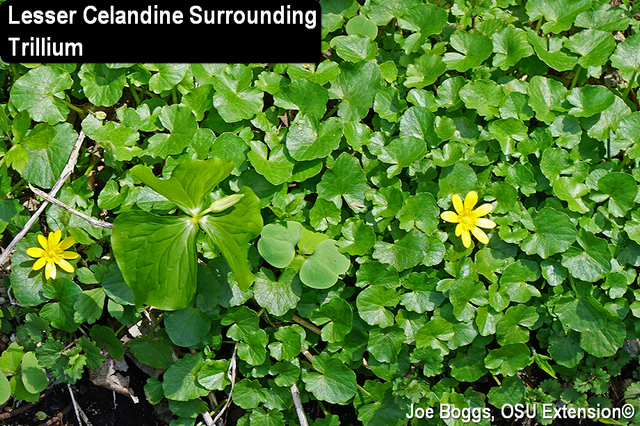 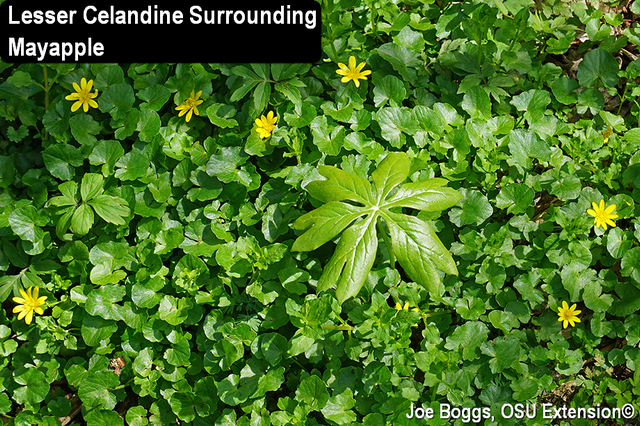 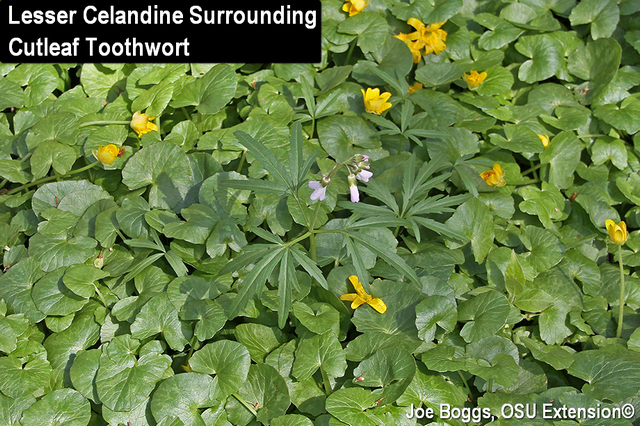 For this reason, lesser celandine appears on the Ohio Department of Agriculture’s “List of Invasive Plants.” Plants on the list were prohibited from being sold or distributed in Ohio.

Take care not to confuse native Marsh Marigold (Caltha palustris) with lesser celandine. Both are spring ephemerals that belong to the buttercup family with plants sporting similar-looking yellow flowers. However, lesser celandine flowers have 3 green sepals and 7–12 yellow to faded yellow petals. Marsh marigold flowers have 5–9 yellow petal-like sepals. Marsh marigold leaves are also much larger and plants lack underground tubers and above ground bulbils. Of course, as its common name implies, marsh marigold does not wander far from wet environs. 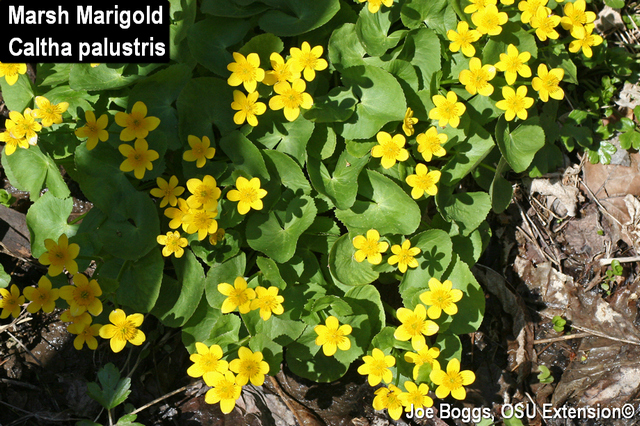 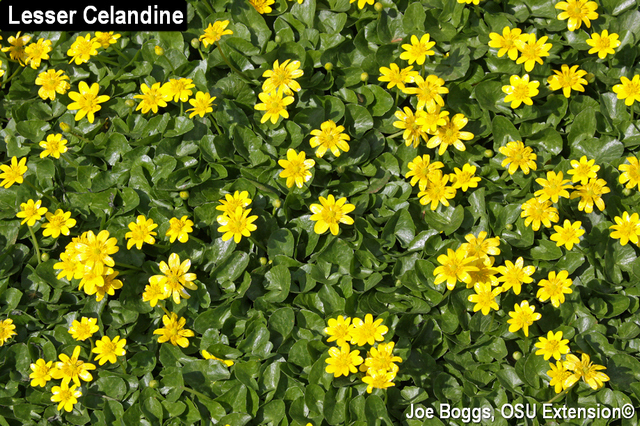 Lesser celandine has three effective secret weapons for survival and spread. The first is a stockpile of underground tubers produced in the spring that is used to store carbohydrate shipped down from the leaves during their brief spring appearance. The energy cycle reverses the following spring with the tubers supporting new leaf growth. Of course, the tubers can also serve as a foundation for new infestations if they are moved around in contaminated soil. 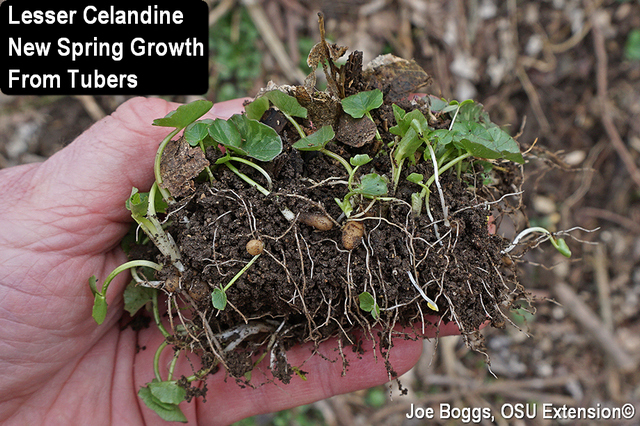 A close examination of leaf axils near the base of mature plants later this spring will reveal the second secret weapon: the aforementioned football-shaped protuberances called bulbils. Bulbils can give rise to new plants and are perfectly suited for being picked-up in the dewclaws of deer. Indeed, deer have been implicated as a major mover of lesser celandine with new plants often sprouting on or along deer trails. 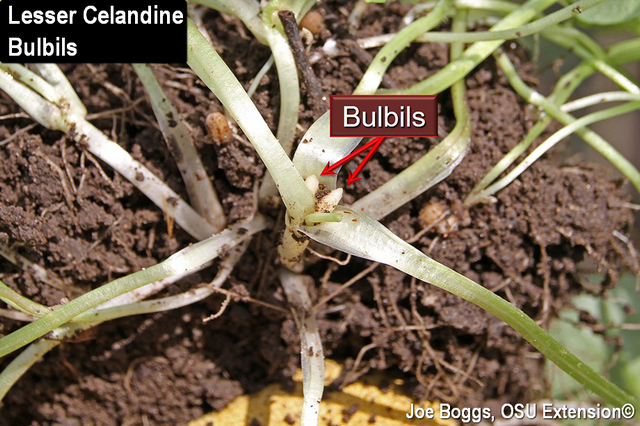 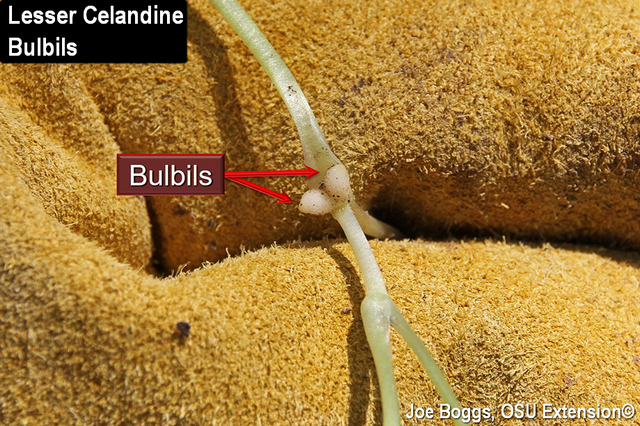 Lesser celandine’s final secret weapon is its extreme ephemeral nature. Plants collapse and disappear from view in late-spring to early-summer depending on environmental conditions. It’s amazing how rapidly a broad expanse of lesser celandine can completely vanish. However, the weed is not gone; it’s just biding its time in the form of recharged tubers that will support ever-expanding colonies next season. 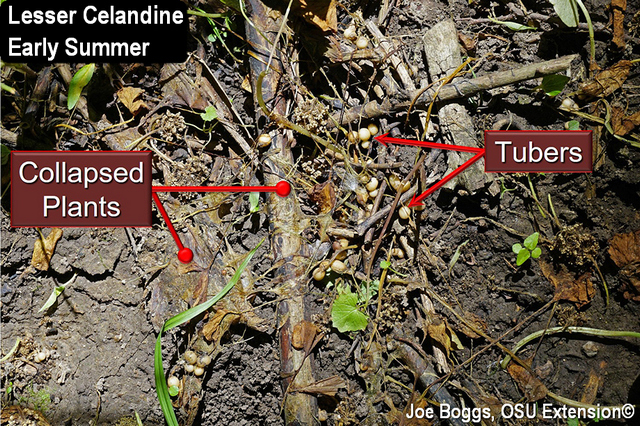 Given the environmentally disastrous consequences of allowing lesser celandine to spread unchecked, this non-native invasive weed should be eradicated as soon as you spot it. Management becomes more problematic once it becomes widely established. Also, spread from neighboring locations where lesser celandine is not being managed represents a constant re-supply of this stubborn weed. 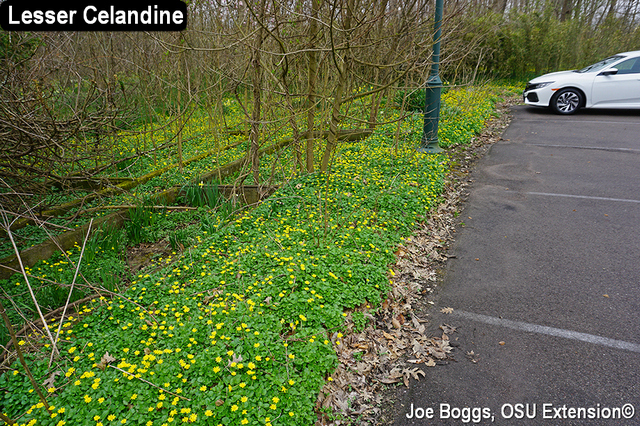 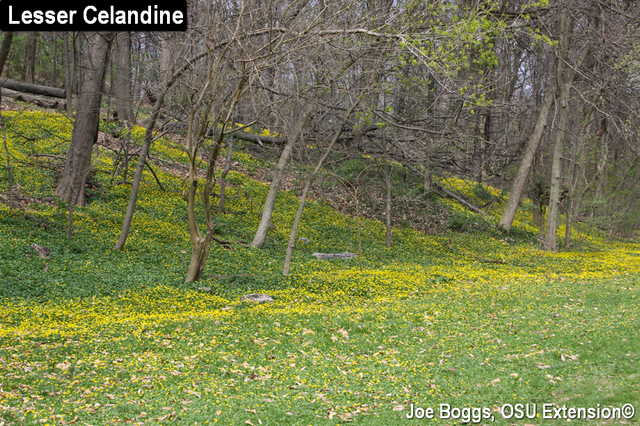 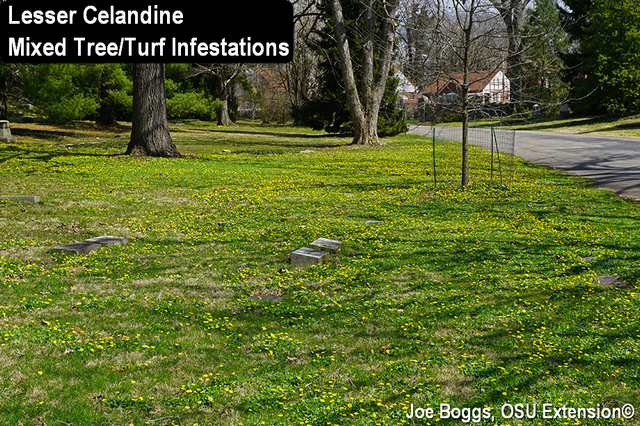 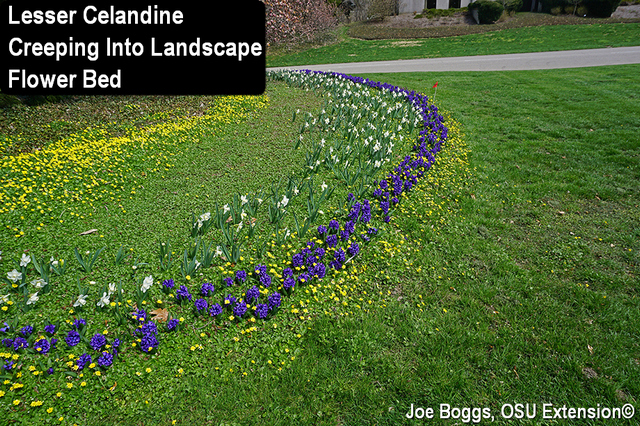 Recommendations for eliminating small colonies include digging and destroying plants along with the tubers. Unfortunately, based on my own observations and reports I’ve heard from frustrated landscape managers and gardeners, this effort usually morphs into an ongoing game of whack-a-mole. It can be very difficult to remove all of the tubers from the soil. 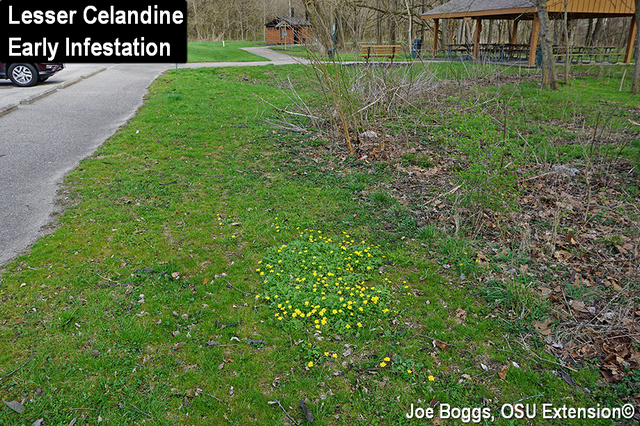 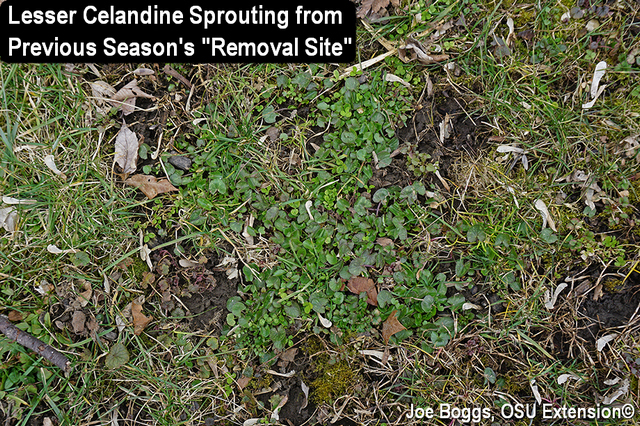 Herbicide applications remain the most effective method for combating this highly-invasive non-native weed. However, dense well-established colonies are almost never eliminated with a single application. 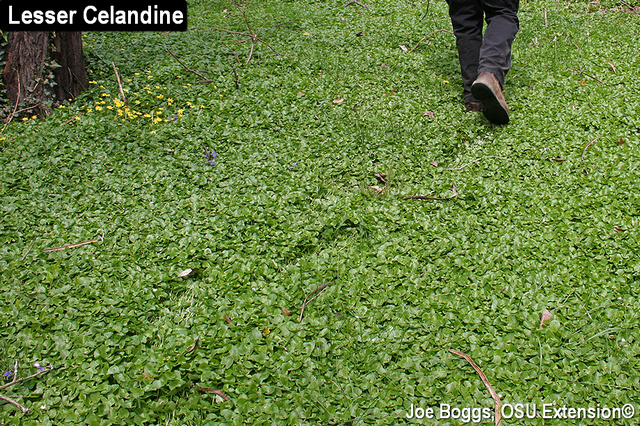 Mowing lesser celandine that has crept into turfgrass appears to have little impact on this aggressive weed. However, many of the selective post-emergent herbicides labeled for use on turfgrass are highly effective against lesser celandine. These include 2,4-D, MCPA, MCPP, dicamba, and triclopyr. It is generally recommended to use products that contain at least 2 of these herbicides.  Sulfentrazone products (e.g. Dismiss) that are most often used for nutsedge control have also provided good suppression of lesser celandine in turfgrass. 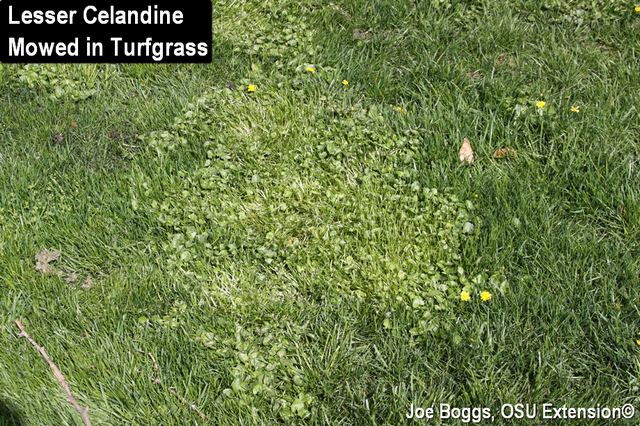 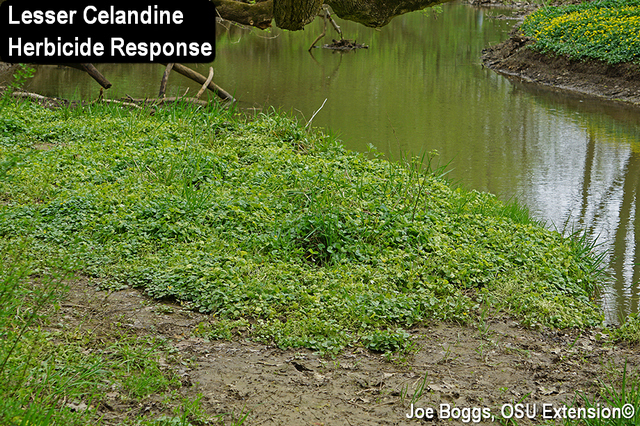 Of course, keep in mind that established colonies are supported by huge numbers of underground tubers. Thus, multiple applications over a number of years may be required to exhaust their energy input.

The same is true for managing lesser celandine in landscapes and wooded areas. The larger the infestation, the longer it will take to wipe-out this stubborn weed. The non-selective post-emergent herbicide glyphosate (e.g. Roundup) is an effective choice given its ability to translocate from the targeted leaves to affect the tubers. As with the application of any pesticide, you must read and follow label directions. For example, if applying to wetland, you must use a product labeled for wetland sites (e.g. Rodeo). 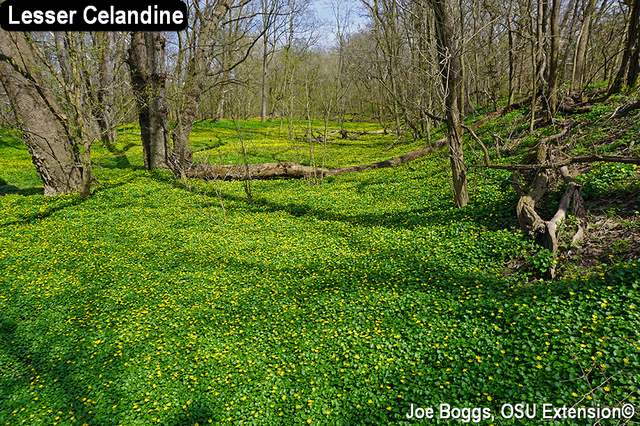 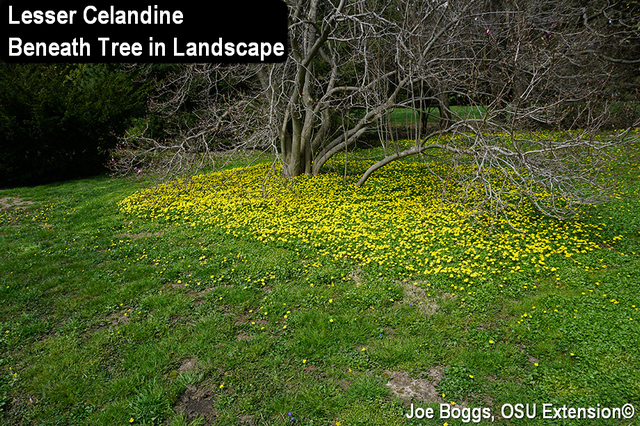 Research conducted in Wolf Trap National Park in Virginia and published in 2017 focused on glyphosate applications made in the spring at three early phenological phases: pre-flowering, early flowering, and 50% flowering.

Anecdotally, landscapers have also had success with pelargonic acid (e.g. Scythe). Although this non-selective contact herbicide does not translocate, it may have a lower impact on preferred plants. Landscapers using the highest labeled rate have had some success and combination products containing glyphosate plus pelargonic acid or glyphosate plus diquat have also been used effectively. Multiple applications made per year, starting before plants flower, and continued over multiple years are required.

Finally, managers of landscapes, parks, and forests should not overlook combining the elimination of lesser celandine with suppressing other non-native invasive weeds. For example, this is also an excellent time of the year to apply herbicides aimed at controlling Poison Hemlock (Conium maculatum).

2 thoughts on “Lesser Celandine and Marsh Marigold: What’s in your landscape?”