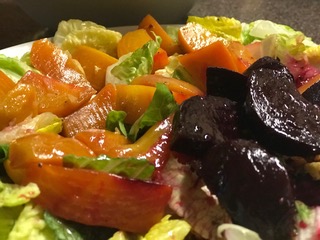 This week with Matt Swaim on the Sonrise Morning Show we chatted about the upcoming celebration Rosh Hashanah which literally means “head of the year”/new year in Hebrew. In some Jewish communities it is traditional to eat the head of a fish during the Rosh Hashana holiday meal.

The wish there is that  they hope everyone at the table will be at the head and not at the tail of whatever they do in the new year.  Fish is also eaten because it is an ancient symbol of fertility and abundance.

Over the centuries it has become associated with many food customs, for instance, eating sweet foods and sweet egg bread  to symbolize hopes for a “Sweet New Year.”

Beets are now a part of the celebration. How did they get into the mix?
Early Jewish/Mediterranean farmers cultivated beet greens as part of the celebration since the root was pretty stringy. Beet greens translated from Aramaic and. Hebrew resemble ways of saying the word “removal” and eating them was done with the hopes that enemies would be removed in the new year.
Over time, beet roots were favored.  Here’s a favorite recipe, and Matt told me he peels the beets ahead of time, then cuts them up/dices and puts them on a roasting pan. So feel free to do it my way, below, or his!
RED & GOLD BEET SALAD

You can use all red, all gold or a combo.

1 bunch each: gold and red beets (3 to a bunch)
Bed of fresh greens
Goat or Feta cheese, crumbled for garnish

Roast beets at 350-400, wrapped in foil until tender. A knife poked into the center will let you know. Mine took a good 1-1/2 hours. Cool, then remove skin – I do it with a paper towel. Can be done a couple days ahead and refrigerated.
Dressing: whisk together – use this as a guide; go to taste
5 good tablespoons olive oil
2-3 tablespoons red wine vinegar or bit more to taste
1 good tablespoon honey
1/2 to 1 teaspoon minced garlic
Freshly ground pepper and salt to taste
Divide dressing ingredients into 2 portions. Use half to add red beets to dressing and the other half for gold – that way they won’t bleed together.
I scooped the beets out of the dressing and put them on the lettuce bed. Right before serving, I drizzled a little more dressing over.