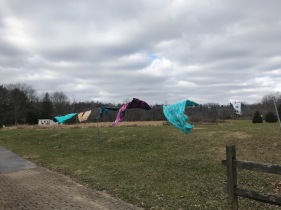 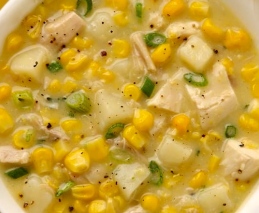 I chatted with Matt Swaim on the Sonrise Morning Show about chicken and its ancient Biblical roots. Did you know chickens were originally bred for cockfighting? I’m glad some savvy person way back then thought they might be good to eat. Here’s a recipe perfect for a bone chilling day like today. It’s about 22 degrees with a chill factor of 15. See how my blankets on the line are dancing in the wind? They only took about 10 minutes to dry! Anyway, this soup sure warmed up cold hands and feet.

One of those “pass this on” recipes. My file note indicates it originated in a cooking class. Go to taste on seasonings and broth. I forgot to add celery in the original recipe, so I’ve added it now. Sorry!

Matt said sub salmon for the chicken, shallots for the onions (they are smaller but have a ton of flavor so go to taste) and heavy cream for the half & half.  Sounds delish!