Each week I chat with Matt Swaim of the Sunrise Morning Show on Sacred Heart Radio. We chatted about those pesky insects and what certain plants can do to help repel them. Some of the plants have ancient biblical histories.
Plants of Bible Times That Repel Bugs Naturally
Have you ever wondered what makes humans so attractive to those irritating and sometimes harmful insects? Insects are attracted to the scent of certain odors and secretions, like sweat, in our skin.
According to experts, there are plants that emit strong scents that help mask your own smell to keep those pesky insects away. By strategically putting plants that repel bugs into your landscape you’ll be adding beauty and function.
Their aroma needs be in the air where you gather so it’s best to rub the leaves a bit to release their insect resistant aromas and virtues.
Basil
Not mentioned specifically in the Bible, but an important ancient herb. Legend has it that basil was found growing near Christ’s tomb after His resurrection.
Hang a basket of basil outside your door or in a window box with other herbs. Rub the leaves a bit as you pass to release the volatile oils that repel black and other flies. One of my colleagues makes the best fly repellent by pouring vanilla over cotton balls in a jar and adding fresh basil and mint. 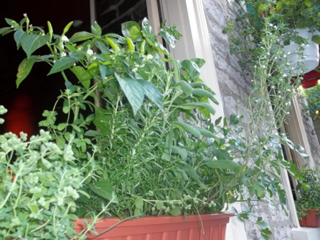 Basil and Herbs in Hanging Basket and Window Boxes
Lavender
In biblical texts lavender is often referred to as spikenard or nard (from the Greek name for lavender, naardus).
Under this pseudonym, lavender appears multiple times throughout the Bible, most often associated with its amazing scent that was prized by ancient people.
Among the plants that repel bugs like flies, fleas, mosquitoes, moths and even gnats, lavender takes first prize. Planted alongside a walkway, you’ll enjoy lavender’s unique aroma when you brush against it. Make a fragrant and bug repelling simmer pot by simmering crushed lavender in a little water. 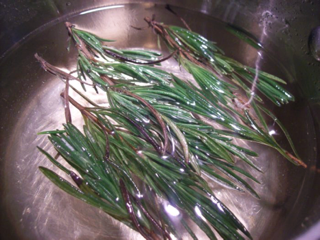 Simmering Lavender Pot
Oregano
Some Biblical scholars believe the hyssop mentioned in the Bible is actually a kind of oregano, which has always grown abundantly in the Middle East.
Greek oregano is the gold standard, but all oreganos multi-task when it comes to insect pests. Oregano contains a good amount of carvacrol, a natural insect repellent. Put oregano around sitting areas outdoors. Rub a few sprigs in your palms to release the bug repelling scent. 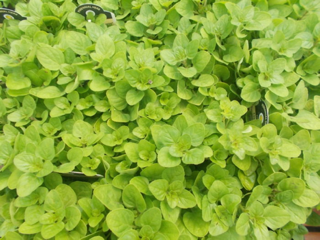 Oregano
Rosemary
Rosemary is an herb associated with Bible times but not mentioned specifically in the Bible.
With its piney aroma, rosemary is anathema to many insects. Make a simple rosemary insect spray by simmering in equal amounts of chopped rosemary in distilled water, covered, for 30 minutes. Let come to room temperature, still covered, so volatile oils don’t evaporate. Strain and put in spray bottles. The spray disinfects the air, as well. Refrigerated, this spray keeps for a couple weeks.

Trailing Rosemary
Thyme
Thyme is one of those herbs not mentioned specifically in the Bible either, but well known and used in Bible times. Was it considered a common herb?
Thyme grew wild in the hills of Jerusalem and was widely cultivated in Bible times. Bruise thyme leaves for an aroma that signals mosquitoes to scatter and quick. Out of all the thyme varieties I grow, lemon thyme is my favorite for its citrusy aroma.

Lemon Thyme
Peppermint
Mint is mentioned as one of the tithing herbs in the Bible.
It’s an effective ant repellent.  Keep pots right outside doorways. But mint doesn’t stop there. Flies, spiders, gnats and mosquitoes keep their distance from this herb as well. Add some to hanging baskets. The mint trails over the top, hanging down to discourage climbing and flying insects.
Dry peppermint for indoor use. Make pouches of dried mint in old socks and place around the house where needed to keep both ants and spiders from visiting.
Catnip
You know this member of the mint family  as the “cat herb”  since the scent is irresistible to some cats. That same scent is a powerful mosquito repellent. It contains a natural oil that, according to a study done by Iowa State University, is 10 times stronger than Deet, an ingredient in commercial insect repellents.
Lemon Balm
This member of the mint family emits a clean lemon scent. Mosquitoes don’t like it. Neither do flies and ants.

A medley of mints
Make A Fragrant Air Cleansing Bouquet
Make a bouquet that is both pretty and effective against skin biting insects. The bouquet cleanses and refreshes the air, making it healthier to breathe. Use any of the herbs mentioned above and add flowers for color if you like. Cut stems at an angle to absorb water easily. As you put the herbs in the water, gently bruise the leaves to release oils and scents. Place wherever people are gathered. 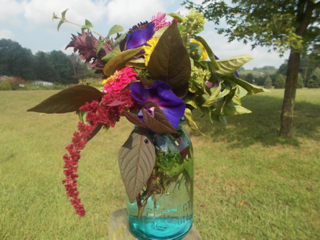 A Vintage Ball Jar Makes a Lovely Vase
Insect Repelling Fresh Potpourri
Strip leaves and coarsely tear them to release scents and oils. Add flower petals if you like. Place in strategic areas. 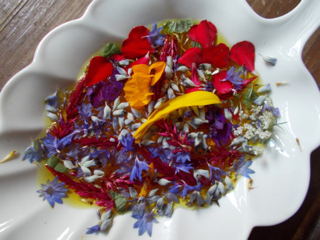 Chrysanthemum
You’ll enjoy pops of color with chrysanthemums. The blooms contain pyrethrum (Sound familiar? It’s used in natural insect repellents and also shampoo for dogs.) which is known to repel and kill ants, ticks, and fleas to name a few. I put pots of chrysanthemums around seating areas on our front patio to keep hitchhiking ticks and ants away.

2 thoughts on “Plants of Bible Times That Repel Bugs Naturally”