I saw these huge beetles buzzing around the corn patch. Seems like they arrive every July (why are they called “June” beetles?). Anyway, friend and colleague Joe Boggs of Ohio State Extension shares this timely information.

Green June Beetles (Cotinis nitida, family Scarabaeidae) are practicing their annual terrorizing of backyard gardeners, golfers, sunbathers, small pets, etc., as they buzz golf courses and lawns. Despite the “June” in their common name, these beetles appear on the scene in July in Ohio.

The large, metallic green beetles tend to emergeen masse. Their large size, coupled with an audible “buzzing” sound and low-level flight plan; cruising at about 2 – 3′ above the ground, may induce mild panic in the uninitiated. In fact, as I discovered in my (misspent) youth, the attractive beetles have great entertainment value. Tying a string to a hind leg of one of these powerful flyers turned the beetle into a drone before there were drones.

Adults feed on tree leaves as skeletonizers, or they may be found on ripening fruit. They rarely cause significant leaf injury; however, they may seriously damage fruits.

The beetles seek turfgrass with high levels of organic matter (e.g. thatch) in which to lay eggs. It has been speculated that this attraction to decomposing organic matter explains why large numbers of adults will cruise above certain lawns while ignoring neighboring lawns.

Unlike other Scarab beetle larvae found in turfgrass, green June beetle grubs burrow 10 – 12″ vertically into the soil and they remain closely associated with these burrows. The grubs exit their burrows at night to feed on thatch and other organic matter.

This is one of the largest and strangest white grubs you’ll ever see in Ohio. First, the mature grubs are huge measuring well over 1″ in length. They look like white grubs on steroids. 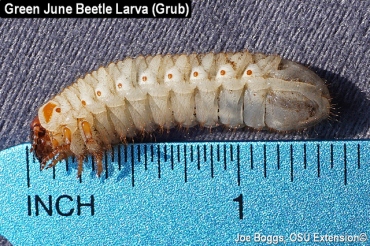 Second, the grubs practice an unusual mode of locomotion: they crawl along on their backs in an undulating motion. Their rolling motion causes them to superficially resemble caterpillars. Their legs are smaller than those of other white grubs in relation to the size of their bodies. Some have speculated their leg-size is an adaptation to life in a burrow while their unusual style of crawling reconciles having small legs. Regardless, the upside-down grubs are surprisingly fast.