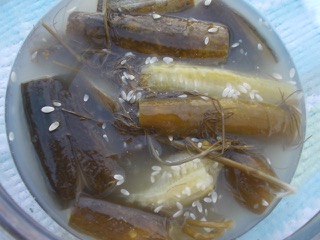 MARY RUDLOFF’S SOLAR DILLS (SUN PICKLES)
No need to be chained to the stove canning pickles. The sun does all the work! In about 3-4 days, you’ll have pickles!

Mary Rudloff is now in heaven making her famous dills. This is an old German recipe. Her daughter, Ann and I have been friends since first grade at St. Margaret of Cortona in Madisonville.  Now you will have to go to taste on the pickling solution.  A little less salt, little more vinegar, water, etc. won’t hurt it.  But the pickling solution should be pretty tangy to make a good pickle.

Here’s my adaptation. Now these pickles taste like the old time fermented pickles. The taste is distinctive and, to me and my son Shane, addictive. After a few days in the frig, they get real crisp.1 gallon glass jar or bowl (jar is a better choice)

Rye bread with or without caraway (not dark rye)

Wash cucumbers and cut tip off both ends.  Mary starts to slice in halves or quarters, starting at one end of cucumber, but doesn’t slice all the way through the other end so the spears remain connected.  You can simply slice them into spears.

Place one or two slices of rye bread on top of last dill layer.

Pickling solution: dissolve 4 tablespoons salt with 1/3 cup cider vinegar in a cup of water. Set aside while pouring regular water half way up the jar of cucumbers.  Pour pickling solution over. Smoosh the cucumbers down into the water. If you need more water to cover the cucumbers, add it.

Lay a piece or two of rye bread on top.  Cover with cloth to keep bugs out.

Day 1: Place in sun, turning jar to face sun several times a day. Bring in at night or if it rains.

Days 2, 3 and possibly 4:  Remove rye bread and replace with fresh bread. Place in sun, turning jar to face sun several times a day. Bring in at night or if it rains.

(Cucumbers will start to turn a yellow-green toward the second or third day. They are done in 3-4 days if it’s warm and sunny out. It was almost 90 degrees here when I made these so they were done in 3 days).

Sometimes a bit of scum will form on top. I remove that with a spoon.

NOTE: If some pickling solution has evaporated during the process, make up more and add it or just add water, depending upon your taste. I like to add pickling solution in the proportion of 2blespoons ea vinegar and salt to 1 cup water.

IMPORTANT: When pickles are done on the last day,remove rye bread and don’t replace. Store pickles, covered, in frig to crisp up.