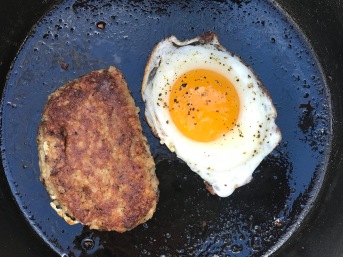 A snowy wonderland greeted me when I woke up early this morning. The decision was made: today would be a goetta making day.

For those of you who aren’t familiar with it, goetta has Germanic origins, but most people who live or lived in certain parts of Germany have never heard of it.  Inge, my German daughter-in-law who was born and raised in Germany said she didn’t have a clue as to what goetta was until she moved to Cincinnati.  Yes, it’s definitely a Cincinnati/Northern Kentucky “thing”.  A possibility about the name is that it comes from the German word “gote” or “gotte” which means peeled grain.  The word became Americanized to mean “goetta”, since the ingredient you cannot do without when making it is pinhead oats.  I make my mother-in-law’s recipe using pork shoulder but have to admit, I still cannot replicate that elusive, absolutely addictive, flavor of Glier’s goetta.

Don Deimling made a delicious version and he cooked his in one of those free-standing electric roasters. I start mine on top of the stove and finish in a slow cooker, while others use the oven or crockpot exclusively.
Terry Balllman’s generational recipe has its origins at the stockyards in Cincinnati.
June Cross’ includes beef shank and marrow bone. The Hoerst family uses ground beef and ground pork. Others add a dash of cloves. Reader Jon Peters uses the recipe and pot handed down from his father-in-law. Jim Reinhart’s crockpot goetta is a reader fave.
Get where I’m going here? About the only common denominator is pinhead, also called steel cut oats. We always used the 2 pound bag of Dorsel’s pinhead oats. I couldn’t find that at the grocery. (An update – a reader told me Kroger here in Cinti now has some available in the baking aisle).
I substituted Quaker steel cut oats, but the container was shy of 2 pounds. Yet the recipe turned out fine. You can use Irish steel cut oats. Don’t use quick cooking pinhead oats.
My German in-laws made stove top goetta with freshly slaughtered pork shoulder/butt.
My sister-in-law, Claire and I use a slow cooker for part of the process.

Everyone who makes it has their own “special” recipe and way to cook it.

“My husband and I lived in Germany two different times.  We lived in both the Munich area and near Bonn.  We also could never find Goetta or any German who knew what we were talking about.
Then while living in Belgium we traveled to northern Germany to the city of Bremen. We had dinner with some German acquaintances and asked them about Goetta.  We were visiting during the winter and were told that we were there at the right time. They said there was a local dish that sounded similar to the ingredients I listed for Goetta, that it was a favorite in the winter months and only made then.  We went to a restaurant that was serving this dish.  It was named “Kohl and Pinkle”.  The Kohl was red cabbage, the Pinkle was a sausage.  Inside the sausage was what we know as Goetta.  It tasted exactly like my German Grandmother’s Goetta back here in Cincinnati.  The Kohl and Pinkle were served with fried potatoes, the same way my Grandmother served Goetta for dinner.
We were told that the dish might have originated in the area around Göttingen, Germany.  The anglicized spelling of Göttingen is Goettingen.  Göttingen is about 250 KM (approximately 150 miles) south east of Bremen.  It is interesting that a similar dish known [here] as Goetta might come from the area around Goettingen in Germany.
It is certainly possible that many of the German immigrants to Cincinnati came from this part of Germany.  My German Great Grandfather came from Rhinow which is about 250 KM due east of Bremen and also about 250 KM north east of Göttingen.”

Dann Wollert: The Food Etymologist’s Research on Goetta (and Prettles)

I just found this information out – Dann delves into the origins of goetta and even prettles/pruttles – fascinating!

It’s about the oats!

As I mentioned, you need to use pin-head/steel cut oats for most recipes, mine included. There are different brands out there, but go for the regular, not quick cooking pinhead oats. 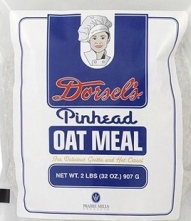 My mother-in-law, Clara, always made goetta in the fall from freshly slaughtered pigs. They used a bunch of different parts of the pig. But after they moved from the farm, Clara started using pork shoulder, with the bone in if possible.

Her recipe was simple, much like my sister-in-law, Claire makes today. My adaptation is a bit more involved, and so far has been a hit.

The key here is to get fresh pork shoulder, sometimes called pork butt, from the butt of the shoulder with a nice layer of fat on it.

Also, you really need to cook this for a LONG time. When a spoon stands up straight in the mixture, it’s ready to pour in the pans.

I started making goetta over a couple decades ago, and I’m still “fooling” with the recipe.

I’ve shared several recipes in the past, so today I’ll share my latest which is pretty darn tasty.

But you know what? No matter how hard I try, it still doesn’t taste as good as my mother-in-law, Clara Heikenfeld’s goetta. I attribute that to the fact that they used different parts of the meat from freshly slaughtered hogs, and, of course, it’s that extra touch of love that made hers special.

My German in-laws’ recipes don’t include beef broth, poultry seasoning or savory. Those are my additions to boost flavor.

Cook meat and veggies on top of the stove and finish goetta by cooking oats and the cooked meat in the slow cooker.

3# fresh pork shoulder/butt with bone in or not, cut in half to fit pan

3-4 cups each: chopped onions and celery (include celery leaves)

Cover meat with liquid by about an inch or so. Bring to a boil, cover, lower to a simmer and cook until meat is so tender that it can be shredded or chopped up fine, several hours. Add water if necessary to keep meat just under liquid.

Spray a 6-7 quart slow cooker and turn on high. Put liquid in and add oats, stirring to blend. Put lid on and cook on high 2-3 hours, stirring occasionally, until oats are thoroughly cooked, tender, and mixture is very thick. If necessary, add more water as oats cook, but be careful. The mixture, when cooked, should be pasty, and thick enough for a spoon to stand up in without falling over. Oats should be difficult to stir. 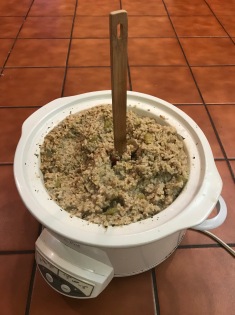 Line bread pans with sprayed foil. Put goetta in, smoothing tops. Cover and refrigerate for 12 hours or so to set up. Store in refrigerator a week or several months in freezer.

To serve: The only way is to fry it with bacon until both goetta and bacon are crisp on both sides. Or in bacon grease. (I know, I know, some of you are fanning yourselves…)

More Goetta Recipes
I have a lot of different recipes from readers, friends and colleagues. Here’s some of the best.

Jim’s recipe continues to be very popular. Here are Jim’s comments: “Add enough salt or it will be bland.  I use bouillon cubes instead of beef broth because of the salt content. Be careful not to add too much water or you’ll be frying mush in the morning”. Jim usually leaves out the sage and I have had more readers say this is an excellent goetta. One reader uses pork sausage instead of plain pork.

1 pound each of ground beef and pork

Combine 3 cups of oatmeal with 5 cups of water in crockpot and cook on high for 2 hours, stirring occasionally. An hour and a half into the cooking, combine all ingredients, except the ground meat and onions, into a saucepan.  Bring to a boil and let simmer until reduced in 1/2 ( one cup). Strain and stir liquid into crockpot. While spice liquid is still reducing, brown beef and pork with onions then add to crockpot either before or after the spice mixture. When all ingredients are in the pot, turn to low and mix well, stirring often for another 2 hours.

Don’t be tempted to add water, even though the goetta gets very thick. Let cool and spoon into 2 casserole dishes. Put one in the frig and one in the freezer for later use. To cook, brown in a non-stick pan or cast iron skillet until personal preference of crispiness is reached.

This is from my catering partner, Bert’s, sister, Nancy. It was her husband Bill’s recipe, handed down from generation to generation. This west side Cincinnati recipe is yummy too!

Put water, salt and pepper in a big pot. Bring to a boil and add oats. Lower heat to a gentle boil and cook for 1-1/2 hours, covered. Stir every 15 minutes. Add meats, onion and bay leaves. Mix well, cover and cook on low for 3 more hours. Uncover and if not thick enough, cook longer, stirring often. Remove bay leaves. Pour into loaf pans. Cool and refrigerate. Cut into thick slices, fry in hot bacon fat until golden on both sides. Freezes well.

This is from daughter-in-law, Jessie’s family. Maggie, her mom and husband Denny enjoy this goetta on their houseboat in the fall. Denny’s brother, Dave, makes this every year for them.

a pinch of pepper

5. Pour into bread pans. When cool place in refrigerator. Will keep for 10 days

6. When readyto use,slice the loaf of goetta and put into a pan in which there is a little hot bacon fat. Fry until well browned

1. Put water,salt and pepper into cooker,cover and heat on high for 20 minutes

5. Proceed as in direction No. 5 and No 6 for regular method.

Mary told me: “My mom made this recipe all the time. You can personalize to your tastes by adding things like garlic, jalapenos, sage, or sausage. Personally, I like the basic recipe the best.”

For easy cleanup—line 2 loaf pans with aluminum foil and divide cooked goetta among the two pans. Cool in the refrigerator overnight. Pull out the foil and slice to desired thickness.

Bernie Butscha’s Goetta
(Herr Pickle)
“This is my Goetta recipe that my Mom gave me. She got it from Grandma Butscha. I’m probable predjudiced, but my family thinks it’s the best. I hope you get a chance to try it.”
Ingredients:
7c water
3c pinhead oatmeal
2tsp salt
1/4tsp pepper
1 large onion, finely chopped
1# gr. chuck and 1# pork loin, ground together
1 beef bouillon cube, dissolved
2 bay leaves
2 cloves
Directions:
Cover oats with water and soak overnight
Mix with meat and onion in a pot
Add  6 cups water and spices
Cook 2.25 hours
Stir often
Pour into 9×13 pan (Tupperware) to cool
Can keep in ice box for couple weeks
Cut into slices and freeze.

Do you make goetta? What is your favorite recipe or story?

3 thoughts on “All About Goetta”